The Battle of Bacon Inferno

I’m rarely scared by anything that involves cooking, but I was pushed to my limits this week when I just barely escaped setting my arm on fire.

As you dear readers know, I often borrow recipes from Bon Appetit. So when I received the June issue with grilled bacon on the cover, I set my sights on it. And then when my Cooking Club elected to center our next meeting around a grilling theme in lieu of pulling recipes from a selected cookbook, I immediately stated that I would be making grilled bacon. As the days passed leading up to our meeting, I read over BA’s directions on how to avoid “Bacon Inferno” several times and I felt pretty confident that I wouldn’t be setting anything (or anyone) on fire. Fortunately for me, my confidence has the ability to transform into calmness when things go south.

When picking bacon for grilling, be sure to get thick-cut slices or ask your butcher to slice it ¼-inch thick for you. Naturally, I ordered my bacon from Fatted Calf and picked it up the afternoon of the grill fest. Their bacon is particularly fatty, which made me slightly nervous (more fat = more potential for inferno), but it’s the best quality bacon I’ve ever had so I knew it would turn out great regardless. When preparing the bacon skewers, be sure to thread the bacon through the skewers like an accordion, piercing through the meatiest part in each slice.

You can make the glaze up to a week in advance. In a small bowl combine honey, chili paste, rice vinegar and Sriracha. Transfer to a sealed container and store in the refrigerator until use. To make the relish, combine scallions, serrano chile, lime juice, sesame oil, ginger and brown sugar in a small bowl. Season to taste with Kosher salt, seal and keep at room temperature.

Now, from someone who nearly ruined it all, my tips on how to grill bacon successfully, in order of importance:

Place it over indirect heat. I can not stress this enough. My cooking club cohort and hostess of the evening (who shall be known as Ragazza from this point forth) has a charcoal grill, which is preferred. You can also do this on a gas grill, but be sure to keep one side of it unlit. Initially we had the coals *mostly* banked on one side of the grill, with a few stragglers on the other side. I figured it would be fine like this and I began to lay down the first batch of bacon skewers. 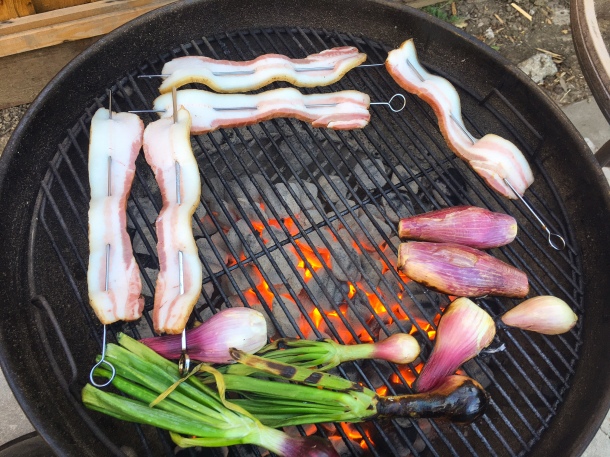 This is the INCORRECT way to arrange your coals and place your bacon. You will also burn the poor onions.

Turn it frequently, about every 45 seconds to a minute. One gal (who shall be known as Almond from this point forth) came out to chat with me while I was flipping the bacon skewers, and I could sense her shared nervousness about the fat drippings onto the coals. I was using tongs that were shorter than I would have liked and when I saw the flames starting to emerge in some of the coals, I asked if she could go grab me an oven mitt (which I may have to replace now). Thank you, Almond for your speedy assistance! As the flames roared up, I swiftly removed the bacon skewers from the grill while simultaneously telling Ragazza that we needed to adjust the coals for the next batch. She responded with, “you’re so calm, Kelsey.” Only on the outside.

This is the CORRECT way to arrange your coals, with a fresh batch of onions on the side.

Patience is key. For the second batch, Ragazza helped me move some of the coals over to one side of the grill, so we were completely coal-free on the other side. I arrange my bacon skewers over the space and turned them every minute or so, moving them around the left side of the grill to get more or less heat as needed. This method definitely took longer (about 15-20 minutes) but I was VERY pleased to see that there was no inferno, and even more pleased with the results.

Glaze, glaze, glaze. In my first batch, I had been in such a rush to remove the bacon and keep it from burning that I didn’t have time to glaze it. So I added the glaze to the bacon off-grill (still on skewers) and cooked it for a few minutes over the new, coal-free space, turning every 30 seconds. This works better than simply glazing already-grilled bacon because you want it to caramelize a bit and work itself into the fat. Since I had plenty of time with my second batch of bacon, I really focused on the glaze and made sure to give each slice two layers per side, turning frequently so it didn’t get too crispy. 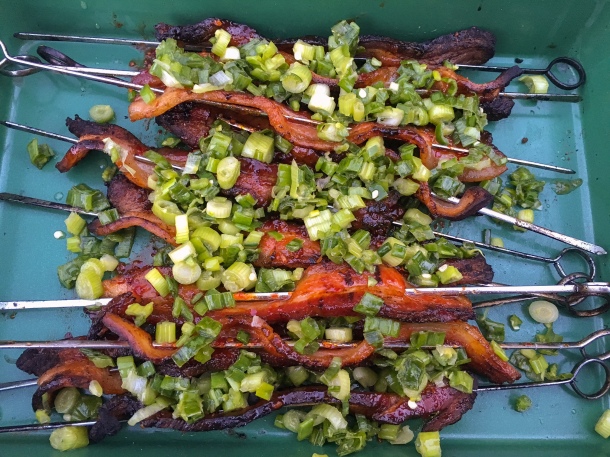 Share it with people that you really, really like. After all, you are risking your arm hair. I kept the bacon on the skewers for serving, and generously topped it with the scallion relish. There were only five of us so each person got to have two pieces, but we all agreed that we would have ate more if it was there (because, bacon). Ragazza noted that it resembled a really nice pork belly, which I agreed with. In fact, I think you could do this with cubes a pork belly and have a similar – if not better – result. Almond thought that I should put the glaze on everything; I think I will utilize the leftover glaze and relish with some scrambled eggs or broiled salmon.

Prior to grilling my bacon, I charred a few ears of corn to go into a salad of tomato, basil, onion, thyme and lime juice. The rest of the ladies in my group also contributed beautiful and innovative grilled vegetables to the event: lettuces and squash blossoms with Caesar dressing, cheese and bacon stuffed jalapeños, spring onions with life changing Romesco sauce (the contents of which were all grilled, except the almonds)… we were surprised yet pleased to see so many vegetables on the plate in a grilling-themed meal, and agreed that the bacon was the perfect meaty addition. Almond finished off the evening with a grilled Angel Food Cake with fresh strawberries and homemade whipped cream, which was the perfect sweet reward to battling a bacon inferno.

Kelsey is a food and wine lover residing in Napa, California, where she does marketing for a boutique wine collective. She previously lived in San Francisco for over six years, where her blogging journey began. She loves to cook seasonal meals and experiment with new wine pairings. She has been drinking and learning about wine with her father since she was 14, and cooking in the kitchen with her mother since she was 6. Both of her parents taught her well about seasoning and flavors, and she continues to learn more with every meal that is made.
View all posts by Kelsey »
← Local Innovation at The Bewildered Pig
Bayside Panzanella →

Candid with a Corkscrew

who wants life to be tidy when you can have more fun making a mess??!