Something wonderful happened a month ago; Annie P. moved into the apartment that I share with KDD, becoming our new roommate! The transition has been pretty smooth, and I am very pleased with the increase in collaborative cooking in the kitchen. Since Annie P. and I have lived together, we’ve made roasted pork loin with lemon-garlic broccolini, Brussels sprouts and ham pizza, and most recently, chicken and dumplings with mushrooms. 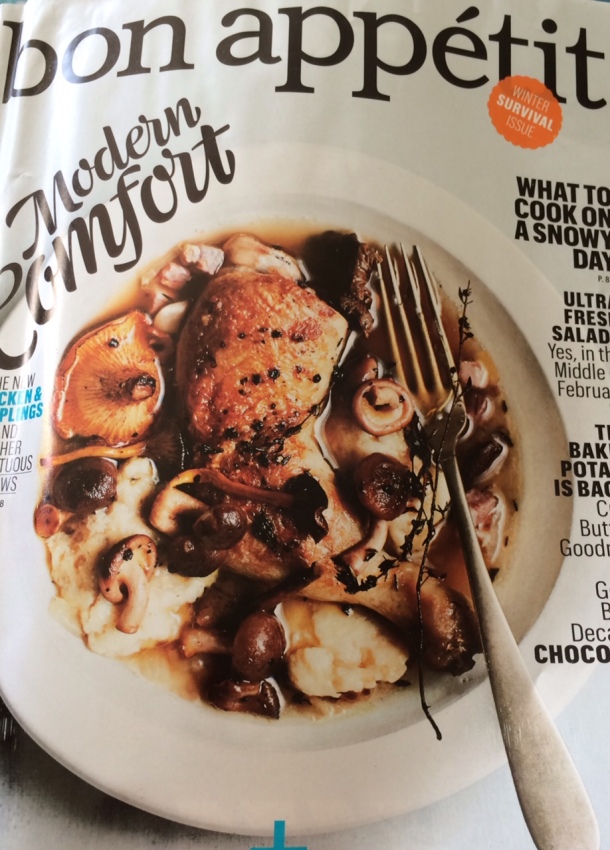 The chicken and dumplings recipe was featured on the February 2014 cover of Bon Appetit. When I first read the recipe, I flagged it but figured it would be something which I would have to devote extra time because it involved a minor amount of “baking” – which I define as anything that uses baking powder, something I tend to avoid at all costs. But after a closer look, I realized the dumpling assembly was in fact much easier than I originally perceived. Still, I was happy to assign this part of the recipe to Annie P. while I worked to prepare the stew. We made only a few changes to the original recipe, but the most relevant was the cooking of the dumplings in the actual broth – which I highly recommend.

In a large Dutch oven (6-8 quarts), crisp the bacon over a medium flame. Transfer to a paper towel-lined plate; once cooled, transfer to a small dish. Meanwhile, place flour in a shallow bowl. Season chicken legs with salt and pepper, then dredge in flour. Cook chicken, skin side down, in the same pot over medium heat until skins are deep golden brown and crisp (do not turn) – about 10 minutes. Transfer to a plate. 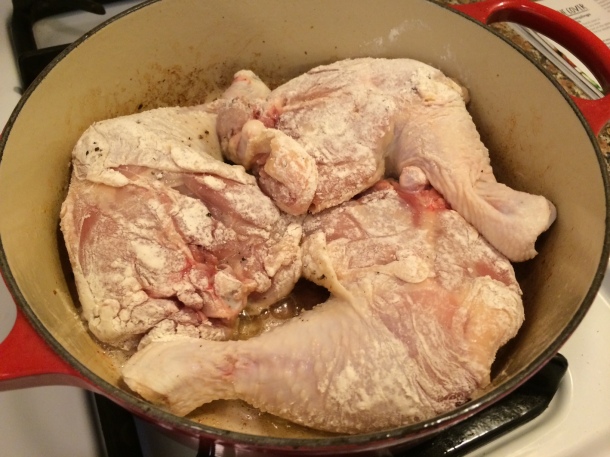 Cook the mushrooms in the same pot, seasoning with salt and pepper and stirring occasionally, for about 6 minutes. Transfer mushrooms to a bowl. Add onion and garlic to the pot and cook until onion is soft and translucent, about 6 minutes.

Add wine to the pot and simmer, until reduced by half – about 5 minutes. Add chicken, bacon, thyme, bay leaves and broth, then season with salt and pepper. If you can’t fit all the broth, add enough to fill the pot (you can add the rest 2/3 of the way through the cook time). Bring to a boil, reduce heat, and gently simmer partially covered for 2 hours. Check the stew every 20 minutes to skim off the layer of fat that settles on the surface. 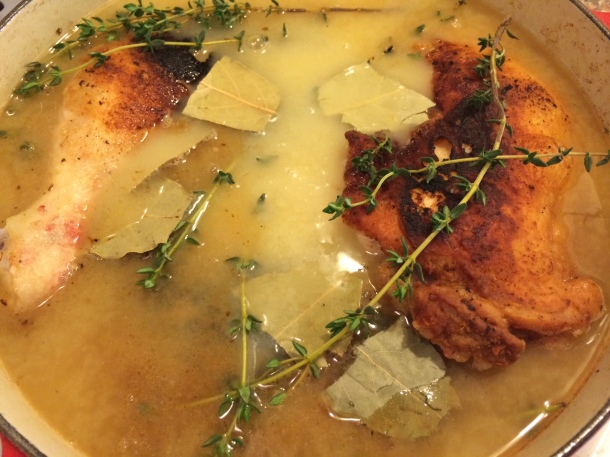 The stew after the mushrooms are added

Meanwhile, prepare the dumpling batter. Whisk flour, baking powder, nutmeg, pepper, salt and lemon zest in a medium bowl. Whisk in eggs and milk (batter will be slightly lumpy), and set aside.

After the stew has cooked, add the mushrooms and simmer until the flavors meld, about 15 minutes. Remove chicken legs from the pot and plate in shallow bowls. Using two spoons, drop small spoonfuls of dumpling batter into the broth. Cook for 5 minutes on simmer, turning the dumplings halfway through. Using a slotted spoon, transfer dumplings to the bowls with chicken, then use a ladle to add the remaining stew to the bowl (be careful not to include any bay leaves or thyme sprigs).

Cooking the dumplings in the broth 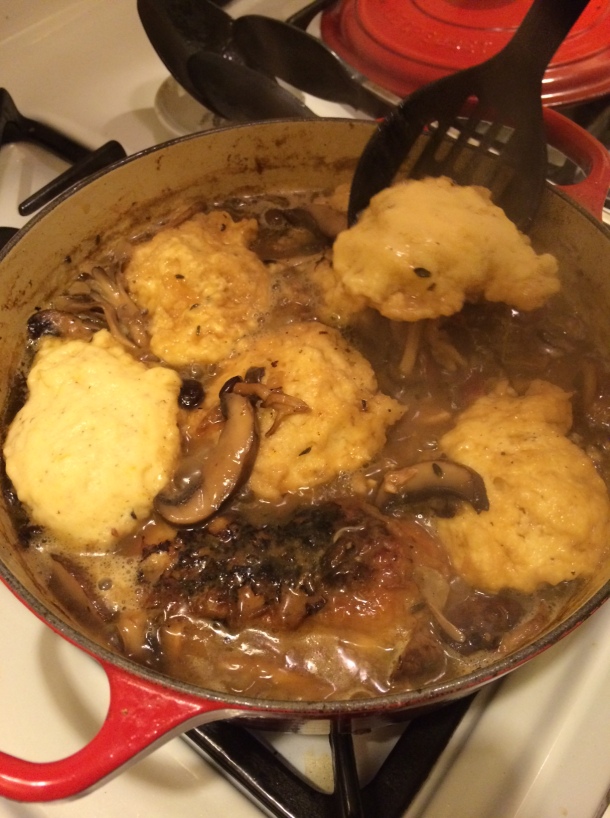 The flavors in this stew were rich and earthy and the layers of ingredients melded together perfectly, probably thanks to the base of bacon fat used to crisp the chicken and sauté the vegetables. The texture of the dumplings was almost like a soft scone. I loved the addition of lemon zest to the batter, as it provided a tangy freshness to the dish that complemented the savoriness. 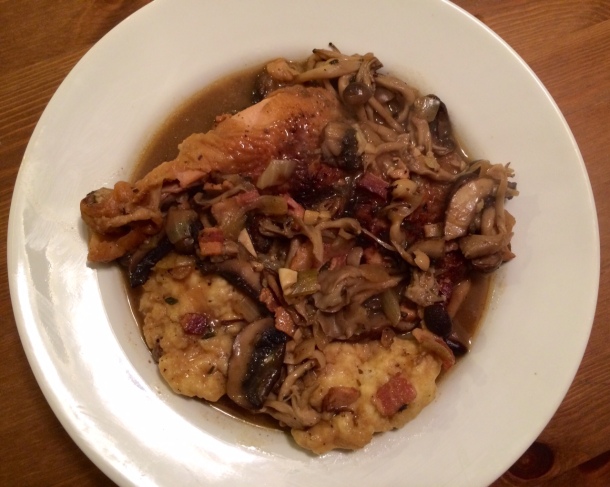 As great as the stew was the night I made it, the leftovers the next day were even better! I particularly liked the softer texture of the dumplings after the batter had rested in the refrigerator overnight. So I highly recommend making enough stew to give yourself some leftovers for dinner the next night. Here are some tips on how I prepared and stored my leftover stew: Before transferring any extra stew to a container, remove and shred any remaining chicken from the bone into the broth. Discard the bones, bay leaves and thyme sprigs. Store leftover dumpling batter in a separate container. Reheat in a pot and add 1-2 cups of low-sodium chicken broth and a few fresh thyme sprigs; simmer, partially covered, for 30 minutes. Cook the dumplings in the broth for five minutes, turning halfway through. Yum all over again!

Pair this dish with an earthy 2011 Pinot Noir from Sta. Rita Hills, such as Melville 2011 Estate Pinot Noir or MacPhail 2011 Rita’s Crown Pinot Noir. The cool ocean breeze in the Sta. Rita Hills combined with the rocky soil makes this is a great region for fuller-bodied Pinot Noir, and the 2011 vintage shows bold flavors of coca-cola, vanilla, nutmeg and blueberry, which will nicely compliment the earthy tones in the stew.

Kelsey is a food and wine lover residing in Napa, California, where she does marketing for a boutique wine collective. She previously lived in San Francisco for over six years, where her blogging journey began. She loves to cook seasonal meals and experiment with new wine pairings. She has been drinking and learning about wine with her father since she was 14, and cooking in the kitchen with her mother since she was 6. Both of her parents taught her well about seasoning and flavors, and she continues to learn more with every meal that is made.
View all posts by Kelsey »
← The Ultimate Ridge Experience
SF’s Version of the Ramen Burger →

Candid with a Corkscrew